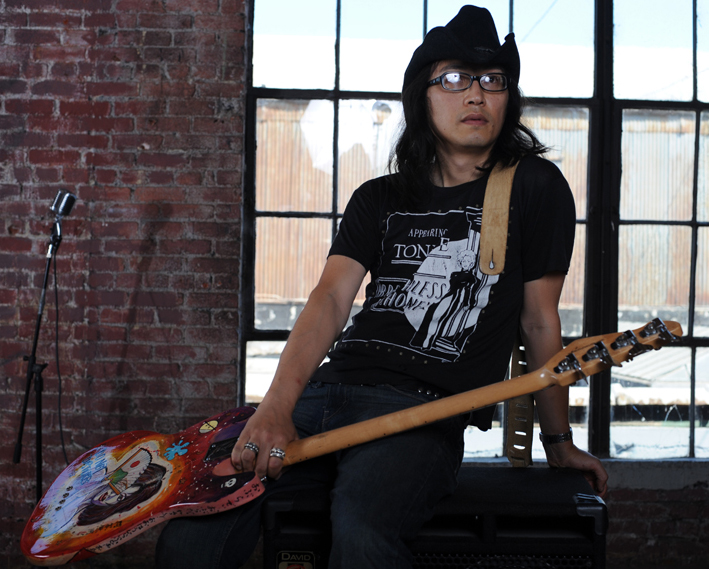 Some of the musicians I’ve worked with:

Currently I’m busy on my project with Todd Riffel called “slowFade”. I write, produce, play bass and guitar, and do the artwork for the cover of the CD and the web site for the band. We are proud to announce that the legendary Josh Freese agreed to play drums on three of the tracks on our latest EP, “Tonight”!
Check us out at https://slowfadeband.bandcamp.com

I am also very much involved with Grace Gravity,  Under The Sky,  and Black on Sunshine.With these projects, my main contribution is the bass and the groove, while being part of the creative force of the project. I enjoy being part of a creative team!

I now live in Leimert Park where there is an abundance of hip hop, jazz and R&B can literally be heard all around the neighborhood.

HISTORY
Previously I lived in Nashville, TN, where I attended Belmont College, majoring in Commercial Music. I learned a lot from my bass instructor Roy Vogt. Soon I was busy playing in the school’s recording studio, where I met and worked with a lot of talented people: Brian D. Hardin, John Painter, Fleming McWilliams, Shawn McWilliams, Lisa Stewart, Jeff Kirk, etc. I started getting busy playing with many bands around town: The Commercials, The Boomgates, Brent Little, etc.

I toured many places, especially the regional Southeast circuit. But one of the most memorable tours was in Germany in October 2000, with John Brannen for a couple of weeks. We played everywhere in Germany, and along the way made a lot of friends, including the legendary T.M. Stevens!